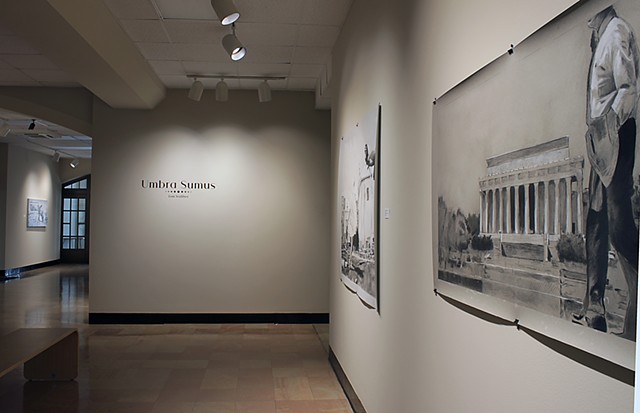 "In his work, Walther combines formal technique and subject matter in unexpected ways. His paintings begin with meticulous, naturalistic studies, the most striking of which are of famous structures like the Parthenon and the Met. With these references, Walther establishes his place in the lineage of art history…but with a twist. […]The image is thus incongruous in both temporal and logical terms, layering inane pop culture references with monumental structures in a monochromatic palimpsest. By restricting his palette to grayscale, Walther allows us to concentrate on these absurdities, giggle a bit, maybe admit that he fooled us for a second before we decide to peer closer to see in which small brushstrokes reality and imagination collide." - A Written Supplement to On Figuration By George Philip LeBourdais "I am a maker of images filled with wanderlust in an invented world with my pictures as the means of transportation. The images represent 'real' places with absurd pairings of subjects and chronologies. In the work, I try to elicit in the viewer’s mind the contradictions of what appears in the picture and what happens in reality. I mean to distill the imagery and color of the perceptible realities into the work so as to isolate it into content." Biography- Tom Walther was born in Muncie, Indiana in 1978. His family moved from Muncie to Dayton, Ohio and then Lancaster, Pennsylvania where he starting painting in earnest in as a high school student. Walther soon after attended Denison University earning a BFA in 2000 and then an MFA from the University of Pennsylvania in 2002.

Since then Tom has exhibited in Philadelphia and Chicago. Currently, Tom Walther lives and works in Evanston, Illinois.